This blog is about the ‘images of peace’ that are imagined, communicated and performed by Israeli and Israeli-Palestinian peace movements. By ‘images of peace’ I mean political images of peace, rather than simply pictures of peace. Political images take their form in public culture by embodying ideas and conceptions of peace materially. For example, solidarity action by the group Ta’ayush to protect Palestinian farmers, recorded on video and posted to Facebook, fashions an image of peace as partnership. Images of peace are simplified schematic mental representations yet also complex condensations of political-cultural themes, brought to life through activism and its mediation. 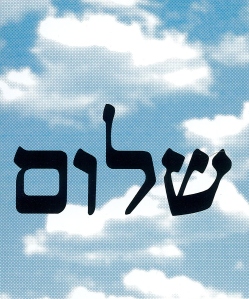 ‘Images of peace’ include visual images such as posters, stickers and banners at demonstrations and in publicity material, which picture peace. David Tartakover’s graphic design for the Peace Now movement, which leaves the image of peace open to interpretation, is a great example. Palestinian and Israeli flags juxtaposed in a placard held at a demonstration visually embody a “two-state solution”. The material from which images of peace are built includes speeches, songs, the use of public space, research reports, opinions disseminated through various media, legal actions taken, education programs developed, and so on, such as tours by Breaking the Silence into the occupied Palestinian territories. Films, theatre, literature, visual art, music and written and photojournalism constitute a ‘peace culture’ that imagine peace, such as the documentary Within the Eye of the Storm, or bi-national street theatre.

More often than not, Israeli ‘images of peace’ appear as opposition to war, occupation, and repression of Palestinians, and so many of my blogs are about the injustice and violence that stand in the way of peace, such as the November 2012 war on Gaza. ‘Peace’ has become a dirty word for some activists who see an endless process during which occupation continues. But other bi-national groups such as Combatants for Peace protest against war together, while the Parents Circle Families Forum seeks reconciliation through shared bereavement at a time of war. My view is that productive images of peace are the ones that protest occupation, images of ‘co-resistance’ and cooperation in the face of occupation rather than wishful thinking about everyone getting along together.

Some of the images considered in this blog include peace as security and separation; reconciliation, coexistence, partnership; or negotiated agreements. Some of those images of peace, such as ‘security’ are incompatible with just peace. I remain ambivalent about whether a ‘two-state’ or ‘one-state’ or other imaginations of peace settlements are best. I don’t think it is useful to be dogmatic, but I can’t imagine peace that doesn’t come to terms with the Nakba and imagine the return of Palestinian refugees, as in the work of the organisation Zochrot. In this blog, I express my own views, fashion my own images of peace and amplify the ways in which peace activists prefigure, imagine and enact peace.

My recent posts include extracts from an autobiographical book I am writing about how my life. opinions and ideas have crossed paths with Israel-Palestine, from growing up in a Zionist family and youth movement, moving from the UK to Israel, becoming an anti-Occupation activist, then leaving Israel for an acadmeic career in the UK and USA.

1 thought on “About “Picturing Peace””