Earlier in the week, as the “pillar of cloud” war raged in Gaza and southern Israel, Combatants for Peace had planned a demonstration for Friday afternoon calling for a ceasefire. This bi-national Israeli-Palestinian organization opposed to violence and dedicated to achieving a peaceful resolution of the conflict had no trouble switching the emphasis of the demonstration (after the ceasefire was agreed on late on Wednesday) to the acute need for direct and immediate negotiations to address the conflict. But the demonstration could have happened on any other Friday afternoon of the year. The world’s attention has been directed in the past couple of weeks to one area of Palestine striving for independence, the enclave of Gaza, but there has been no let-up in the Israeli occupation of the West Bank.

In the last few months Combatants for Peace has been supporting the struggle of a small, isolated Palestinian village, Izbat Tabib, that is close to the Palestinian town Kalkilya and the large Israeli settlement, Alfei Menasheh. Izbat Tabib is in Area C of the West Bank, the area constituting about 60% of the West Bank that according to the Oslo agreements of 1993 remains under full Israeli civil and military control until a later agreement. It’s nearly 20 years later since then, and Israeli rule is increasingly permanent and restrictive. For Izbat Tabib that has meant losing about 45% of its land to the building of the Separation Wall in 2011 and demolition orders, issued by the military government, for most of the homes and the village school that also serves as a community centre.

The group of about 100 Palestinians of Izbat Tabib and Israelis from the Tel Aviv area marched the short distance from the school to the junction with the main road. Protesting  the occupation in general and the demolitions in particular we chanted slogans in Arabic, Hebrew and English: “No, no to war; yes, yes to peace,” “One, two, three, four, occupation no more; five, six, seven, eight, end the killing, end the hate,” “Jews and Arabs refuse to be enemies.” We held placards, mostly in Hebrew, on which were written slogans such as “There is a partner,” “it won’t end until we talk,” and “yes to dialogue, no to violence.” But other than passing traffic and the rain clouds quickly crossing the windy sky, nobody was listening or watching.

And then our audience arrived. Hesitantly at first, they kept their distance. Then they must have called some friends, and a small group of military vehicles and soldiers came and stood close by. The Tel Aviv – Tulkarem group of Combatants for Peace use theatre as one of their approaches to non-violent resistance to occupation, and have previously performed for the villagers. Today, the improvised performance was for the soldiers. At first a couple of the demonstrators took up stances showing the soldiers how we saw them, how they held their guns, how they watched us. They turned to show us what they were doing, and then more demonstrators became actors, moving and standing in ways that showed the soldiers how we thought they saw us. A rainbow joined in. Then we all crammed in together to show that we could all be that close, without fear, without hatred, without any need for the red sign that warns Israelis it is dangerous to enter a Palestinian village. 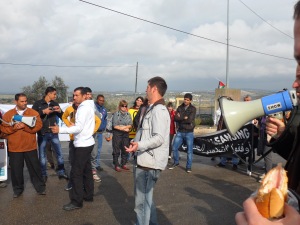 Demonstrators acting the roles of the watching soldiers

The audience didn’t seem very appreciative. They came over-dressed, with far too many military accessories. Some seem to have got bored and left early in their armoured vehicle. One guy kept his distance throughout, staying with his vehicle on the other side of the road. Perhaps they were wondering why they had to be there and when they could go home. Maybe we should have brought snacks for them. We didn’t have a programme for them to take as reminder of the event. And really, they didn’t need to be there. Really, the Israeli military doesn’t need to be in the West Bank at all. They don’t need to come and demolish homes and schools, to build a Separation Wall on Palestinian land. We can get along fine without an audience, performing for each other the roles that neighbours play for each other. We’ve been playing a theatre of cruelty for too long, a theatre of domination and oppression, a theatre of fear and hatred. Combatants for Peace are writing a script for a new play and are ready in the wings to perform it. They just need a bigger troupe of actors and a larger audience. 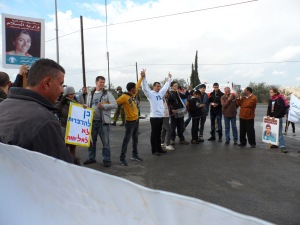