It has been a difficult week in which to remain optimistic about the prospects of Israeli-Palestinian peace. Whether or not one is committed to a two-state solution, the dispossession and displacement of Palestinians – daily acts of the ongoing Naqba – push the chances of a just peace further over the horizon. Measures taken by different branches of the Israeli state upped the pace of creeping annexation of Area C of the West Bank. The military served notices – if being pinned to an iron post counts as serving notices – to some 300 Palestinian families from Ein Al-Hilweh and Umm Jamal in the north Jordan Valley that they must evacuate their homes and take all their possessions with them within a week. Attorney-General Avichai Mandelblit ruled that it is legal to confiscate private Palestinian land to build roads to thirteen illegal outposts. That legalization of dispossession would reduce yet again the land in Palestinian hands and increase the fragmentation of Palestinian presence in Area C while solidifying the process of exclusive Jewish settlement.

Perhaps what got to me most this week wasn’t even that bad news. The steady flow of information I have about the harassment of Palestinian farmers in the north Jordan Valley by settlers and soldiers comes mostly from Guy Hircefelds’s Facebook page. Guy records what the grassroots activists of Ta’ayush  and other groups encounter when they go to work in partnership with the Palestinians there. There are some good days when his photos are of pastoral scenes of shepherding. There are much worse days when buildings have been destroyed, when the army block access to land, when a settler breaks an activist’s arm.

Guy leaves his page open for comments and by now he is well known to right-wing advocates of exclusive Jewish settlement. There have been some extended exchanges, mostly full of mutual insults and accusations, but the occasional hint of openness. Guy invites adversaries who claim there is no violence against Palestinians to come and see for themselves, and some settlers invite him to come and see how they live. Well, invitations of sorts.

But the comment on his page that made me most glum came in response to his report of a relatively large solidarity action – the visit of a group of Israelis, including Combatants for Peace,  members of the Israeli Parliament, and Palestinian leaders. On Facebook Lital Miller mocked the activists as miserable, self-hating traitors, adding that their action would make no difference. And I thought she’s probably right about the last point. There will probably be a concerted legal campaign that will delay the expulsions, maybe similar to the one that has so far prevented the removal of Palestinian Sussiya. Perhaps some European consular staff will come to visit and their Foreign Ministers will send a rebuke to the Israeli government. But sooner or later, the creeping annexation will creep further, Area C will be emptied of Palestinians and so why (according to the Israeli consensus) shouldn’t it become part of the State of Israel? She could be proved right.

I couldn’t even comfort myself with the thought that Palestinian allies in the Arab world will muster to block this coming dispossession. It looks as if Prime Minister Netanyahu has succeeded in his goal of turning Saudi Arabia – and other Sunni Arab states – into a regional ally. So what if this relationship of common enmity to Iran might drag Israel into an unnecessary war with Hezbollah and maybe Syria, so long as it means the autocratic monarchs will let Israel do what it wants in the West Bank? Just as 40 years ago in 1977 when the Likud-led Israeli government opened itself up to a peace accord with Egypt, another Likud-led government seems to be doing better at making friends in the Arab world than the Israeli ‘left’. In other words, the Israeli government is going to get away with its intensification of the settlement project and its gradual Naqba.

So is there any hope, even dark hope, as Ta’ayush  activist David Shulman calls it. Yes, precisely in the determination and commitment of activists such as Guy there is hope not only for the future, but more significantly hope in the present. Hope because I can see in his photos what peace looks like – the partnership of Israelis and Palestinians on the ground. Not all of them, of course, but enough righteous people for it to be worthwhile not to give up. Hope too in the memory of 40 years ago, when Israeli jubilation about Egyptian President Sadat’s visit showed what lies in Israeli hearts – to be accepted, to be understood, and maybe – as the wonderfully angled shot of Begin and Sadat apparently about to kiss suggests – to be loved in the Middle East. But goodness, most Israeli Jews, including those making nasty comments on Guy’s Facebook page, have a very odd way of showing that they just want to be loved by their neighbours.

For this first time (June 3, 2016) I’ve been able to participate in the monthly Palestinian-Israeli “Freedom March” held at “machsom haminharot,” an Israeli checkpoint on Route 60 to the south of Jerusalem, just by the Palestinian town of Beit Jala. The march is organized by a coalition, in which Combatants for Peace are a key partner, along with another organisation called “omdim beyachad” in Hebrew (standing together). The group has operated since an upsurge in violence in October 2015, offering a clear alternative to the usual pattern in which Israeli Jews and Palestinians each increase their antipathy to and fear of the other.

Being who I am, I had already seen video clips and photos of the event posted on social media, and was expecting the colourful cloud of balloons in the hands of the marchers when our bus from T

el Aviv arrived at the meeting point. The protest procession crossed the main road slowly, but did not block it, and amid the shouting of slogans and the displaying of placards, found shelter from the sun under the monumental concrete overhang of the separation barrier at this point. 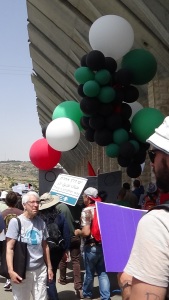 The protest ended with short speeches (translated into Hebrew and Arabic) by MK Aiman Oudeh, the charismatic leader of the Joint List, Leah Shakdiel, a long time feminist and social activist who represented the religious peace group Oz v’shalom, and representatives of Combatants for Peace. But I won’t talk today about the content of the speeches, the formulation of slogans (also translated and transliterated between Hebrew and Arabic), or even the ritual of releasing the balloons from under the concrete canopy into the freedom of the skies.

Instead, I want to focus on another part of the protest, the performance of a short scene in which Palestinians and Israelis role played soldiers and themselves in a typical encounter at a checkpoint, an encounter which involves verbal and physical violence, detention, constriction, humiliation, pushing people to the ground. The performance ends with a call for non-violence, to the applause of those who had gathered round the scene. An upper level of the walkway by the separation barrier served as a stage, and some but not all  of the demonstrators gathered together to watch – although it was difficult to hear. Yet, the point is not the production or acting quality of this performance. 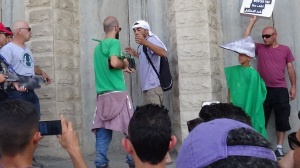 “Standing together” itself performs the vital political position of “refusing to be enemies” at a time of heightened tension, and in the context of a conflict to which no political resolution can be seen on the horizon. Combatants for Peace, along with other groups participating in the freedom march, such as the Bereaved Families Forum, and the Jewish-Arab parliamentary bloc Hadash, have performed this partnership, including acts of co-resistance, for years now. Combatants for Peace has also turned consistently to the “theatre of the oppressed” as a key element of its activities, often in more rehearsed ways and in settings in which the audience could participate more easily. They have documented some performances, and I have written about one I saw a few years ago.

In the setting of the demonstration the performance has particular significance. We can stand together, we can march together. But we can do so meaningfully better when we have learned to stand in the shoes of the other, whether through role play or dialogue or hearing each others’ stories. Combatants for Peace is a partnership of Israelis and Palestinians who have seen how their armed force and violence of the other feel from the point of the other. They stand together by seeing themselves from the other stands, When you have stood in the shoes of the other, and experienced with them what it’s like to commit or be subject to violence, then standing together just feels a whole better than standing against each other.