I’m returning to Be’er Sheva from Tel Aviv. I’ve been to the August 11 demonstration for equality to protest the controversial nation-state law in Tel Aviv. It’s late, so I hop in the front seat of the next cab in line. The driver, who looks about 30, has bluish eyes and a crew cut. When I tell the him the address, a man hears me through the open window and asks if we are going to Ramot. The driver invites him to hop in the back seat. He and the driver have some friendly banter and I wonder if they know each other.

The man has a strong Arabic accent and though he may be a Jewish immigrant from an Arab country, I think he’s a Palestinian citizen of Israel. He starts to complain about the people on the train, and that they were loud and unruly. “It’s a matter of culture,” he says, and I wonder what culture he’s referring to.

The driver points out that I sound American. I too have a strong accent when speaking Hebrew. To find out more about the backseat man’s culture, I mention that I was at the demonstration for equality.

The driver turns to me in anger. “Why? We have equality here. That demonstration was against the nation-state law. Are you against that?” The back seat man says he doesn’t support the law. “Why not?” asks the driver, and I get the information I was looking for. “Because I’m Arab,” the man says.

“But you have equality here. Where do you work?” The driver asks.
“At the supermarket.”
“You have jobs, you have access to the same services. You see, there is equality here in Israel. The law doesn’t change that.”

“From your experience there is equality in Israel,” I say to the driver. “But there are experiences that you haven’t had, that Arabs have had, so they have more information about the inequality. It’s hard to see that when you’re the majority.”
“Like what?” He wants to know.

We’ve arrived at my house but he doesn’t stop the car. When he turns around, I ask what he’s doing. “I’m taking the other guy home first.”
I ponder my situation for a moment to assess my personal safety. The driver is clearly distressed. If I insist he let me off here, there’s a good chance he’ll comply. But if this man is dangerous and I get out, then the Palestinian is at risk. And if the driver is dangerous, who is he more likely to harm, a female American Jew or a Palestinian man?

My conscience and my curiosity allow him to drive off with me still in the car.
The Palestinian lives the next street over, and it’s a quick and silent trip. The driver brings me back and tells me he’s Beitar football supporter. Beitar fans are known for their hatred of Arabs, anti-Arab chants and racist slogans. He says it as if it’s a bit of a dirty secret, in a ‘between you and me’ kind of voice. He doesn’t want any Arabs or Muslims living in Israel. He also doesn’t like Jews going to the West Bank to
live next to ‘them’ he said. I appreciate he’s consistent. 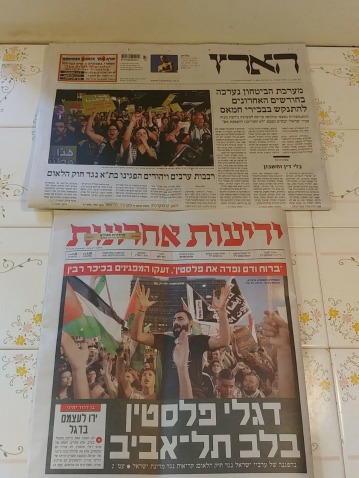 Contrasting headlines: Ha’aretz – “Tens of Thousands of Arabs and Jews demonstrated in Tel Aviv against the Nationality Law.” Yediot Aharonot – “The Palestinian Flag in the Heart of Tel Aviv.”

He asks me who was at the demonstration. Surely it was only Arabs, he says. I explain it was a mix, probably mostly Jews.
He heard on the news that they were waving the Palestinian flag in the demonstration. The Yediot Aharonot headlines said in huge letters, “The Palestinian flag in the heart of Tel Aviv.” The headline was successful in activating his nervous system. The use of the word ‘heart’ was particularly effective.

“The flag is a symbol of someone’s identity. The flag itself doesn’t carry a message about harming the Jews, nor did those people carrying it. They were peacefully asking for equality.”
“This neighbourhood is 30% Arab now,” he informs me.
I ask him if he personally has ever had a bad experience with an Arab.
“The ones in this area are educated. They are doctors and professionals,” he explains.
“Yes, they want to work and raise families and be healthy, like us. They don’t want to hurt us.”
“And what do you do for work? He asks.
“I’m a psychotherapist.”
“How much do you charge?”
“55 pounds an hour.”
“I have panic attacks. Do you work with that?”
“Yes. It’s scary.”

I’m referring to everything. To his panic attacks, to the terrorist attacks, to seeing flags and not knowing what is the meaning for the flag waver, to me being alone with him in his taxi.

By driving me safely home he’s proved my point. “It’s scary for all of us, but the truth is the majority of Arabs and Jews are just typical people trying to live their lives in peace.”

“Whose provocation?” asks the Ta’ayush activist who has recorded on video an Israeli soldier striking one of her fellow activists. Rightly, she says the provocation came from the soldiers who had come only to see what was happening, not even to serve a “closed military area” order, not even to make the Palestinian farmer stop ploughing the field next to the olive grove, not even to tell the other Palestinians, Italian volunteers and Israeli activists to get lost. So, in that sense, the blows dealt by the soldier to another activist filming him were unprovoked. He seems to have worked himself up into aggression by his own monologue about the “traitors” who were accompanying Palestinians from the town of Bani Naim to work on their land under the noses of the settlers of Pnei Hever. The local relations of occupation between the two places have been rehearsed many times before but of course the settlement has an army on its side in this uneven conflict. On this occasion, and following reports of the incident in Ha’aretz and other news outlets, even the Israeli army deemed that the soldier, Alon Segev, had used excessive force and discharged him from reserve duty. His blows were unprovoked.

Yet, in another – and good – sense, Ta’ayush were being provocative. I was with the Ta’ayush activists in the South Hebron Hills that day, August 10th 2018, but I was elsewhere, accompanying a shepherd, when this incident occurred. When after a short hike I joined the group near Pnei Hever the activist who had been hit was just being driven off to an emergency room as he was feeling unwell. Then I found this provocative scene. While the guy on the tractor got on with his ploughing, Israelis, internationals and Palestinians sheltered from the hot sun under a tree. Hot, sweet tea and coffee were served, some snacks were passed around. Various conversations murmured on in different languages, in a blend of Hebrew and Arabic about the spring connected to a cave whose water used to feed the fields we were in but is now within the fence of the settlement, about politics and peace, about Catalan and linguistics, about how the Israeli matriculation exam in Arabic doesn’t enable students to speak Arabic. By the time the ploughing was done and the picnic was packed up, I had given my address to two of the Palestinians, one who is already studying a PhD in the UK and the other who is about to come to study. 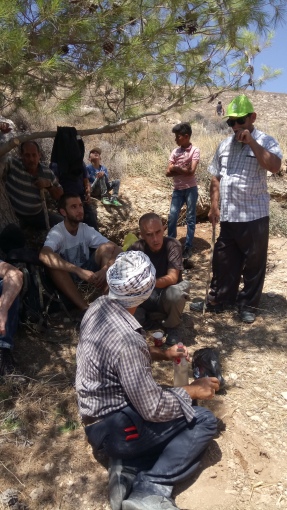 So why is this picnic provocative? Because the co-resistance to Occupation by Israeli Jews, non-citizen Palestinians and internationals defies the accepted logic of separation between “Jews” and “Palestinians” that underlies the conflict. This relaxed togetherness and well-practiced partnership resist all the opposing practices of dispossession, estrangement, demonization and denial that fuel enmity and convince Israeli Jews that “there is no partner for peace” and they must always “live by the sword.” The picnic provokes further because it shows that peace is not made by living behind secure borders and in isolation from each other, but by confronting injustice together.

That evening I participated in another provocation, a demonstration in Tel Aviv by Jewish and Palestinian citizens of Israel against the new Nationality Law that enshrines already-existing inequality by asserting the rights of the Jews in Israel above all others. The law is itself a provocation against democracy, but much of the Israeli press chose to focus on the “provocation” of the display of Palestinian flags by some of the demonstrators (against the wishes of the organizers). A provocation to show that there is a Palestinian as well as a Jewish nationality in this land between the river and the sea. A provocation to gather and march together in the sultry humidity of a summer night, to protest the racism of ethno-religious superiority in a territory in which two peoples dwell. I preferred the hum of conversations under the tree to the long speeches at the demonstration, but in their own way each was a provocation to resist oppression and struggle for just peace. 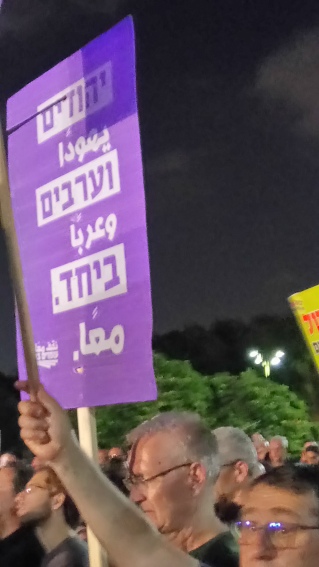