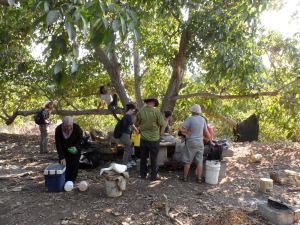 This is a guest blog written by Ariel Katz, a Jewish American currently living in England.  She has a degree from Cornell University in Middle Eastern Studies, and has worked in Israel for Interns for Peace. She has a passion for Middle East peace, and writes fiction and non-fiction on the topic for outlets such as CGNews.

This is a story of Exodus and diaspora.  Rema was looking for a doctoral programme in Canada, because Canada has a loose immigration policy.  She didn’t want England, she said.  Or America. Too difficult to get in.   She would have to learn English she realised.  She had a two year plan.  In two years, when her now 16 year old son turned adult, she would be free of her mothering duties. Free to start a new life.  Israel was a difficult place to live for anyone.  Even more so for a Palestinian Muslim woman.  Years ago she would have been called and have called herself an Arab. Times have changed. Identities have morphed.  “Arab” no longer means much.  It never had really.  Not more than a person whose mother tongue was Arabic.  “Palestinian” has a connection to a people who share a story.

Enat told the guy picking olives with her in the West Bank village that she was moving to Canada.  “It’s game over here now,” she told him.  People who want peace in Israel have nowhere to move but out and away.  It’s now illegal to talk about boycotting products from the West Bank settlements.  It’s akin to being a traitor.  She had always advocated peace with the Arab population in Israel.  She had always been active.  Recently she had given up, burnt out, and she was here picking olives.  Helping a Palestinian family harvest from their olive trees.  Permits were needed for the West Bank family members to get to their own groves.  Many olives fell to the ground and rotted due to lack of permits.

A bus load of Israeli volunteers form the Tel Aviv area came to help, to spend the day with the trees, picking.  There were no instructions, no “Pick this size not that size”. Just “Pick them all, we are not coming back.”  And pick she did.  She spent her Saturday, her Sabbath, picking olives for a family she had never met.  Mr and Mrs Ali, that was all she knew.  As she explained to a fellow Jewish peace activist that she had given up, she was raising her arms towards olive branches laden with ripe olives, reaching for them, picking them, lightening the burden on those gnarled branches which seemed wrinkled like old people.  She filled sacks with olives of all sizes.  It felt good to be outside, to be with nature, to be doing something useful, talking, working with like-minded people.  It was invigorating.  She had given up she said.  There was no way forward. She would leave soon.  Yet she was here.

And so it went.  Israeli citizens became disillusioned with the possibility of peace.  The government had taken more and more actions that incited anger and threatened the rights of the Palestinian population. What was the point of advocating peace when government actions were actively unravelling more good will than the peace groups could generate?  There comes a point when enough is enough.  Jews decided to leave because they were ashamed to live in a place that treated the Palestinian population with such contempt.  Palestinians were leaving because peace was elsewhere.  And where could they go once they had decided that staying wasn’t an option?  Somehow, they all decided on Alberta.

There was an exodus from Israel/Paelstine following the intolerable situation.  Some left because they wanted to, some left because they were too scared to stay.  And a large group of expats, both Jewish and Palestinian, ended up in Alberta.  They set up falafel stands with freshly made hummus.  They bumped into each other in shops selling olive oil from their homeland. They spoke together in Hebrew with Arabic slang thrown in – and in Arabic peppered with Hebrew.  You could hear the children of Abraham calling each other, “Ya uchi (O my brother).”   There were no borders in Alberta.  There were no segregated neighbourhoods.  The Jewish Israelis and Palestinians filled the gaps left by their missing family members by opening their homes to each other.  The smell of cumin was acceptable.  The situation was similar to that in other cities around the world, where the Hebrew and Arabic speakers feel closer to each other than to the other nationalities in the area.  They share roots.  They share stories and experiences.  They share nostalgia for the homeland that until now, they hadn’t found a way to share.