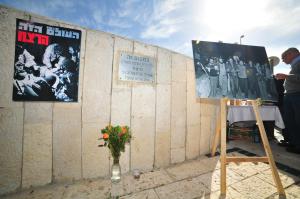 Last Sunday marked the 30th anniversary of the murder of Emil Grunzweig, a Peace Now activist who was killed when a right-wing extremist threw a hand grenade at the close of a stormy demonstration. Two days earlier, the Kahan commission, which had been charged by the Israeli government with uncovering the factors leading to the massacre of Palestinian refugees in the Sabra and Shatila refugee camps in Beirut the previous September, had announced its findings. It held the then Defence Minister Ariel Sharon indirectly responsible for the mass murder perpetrated by Christian Phalangist forces, calling for his dismissal. Peace Now had been actively opposing Israel’s invasion of Lebanon since a couple of weeks after it began in June 1982. This was the first time that Peace Now had criticised the government’s deployment of its armed citizenry at a time of war. As Israeli forces advanced well beyond the 40km limit declared initially for ‘Operation Peace for Galilee’, Peace Now rallied 100,000 demonstrators in Tel Aviv under the slogan ‘What are we killing for?  What are we being killed for?’ Following the massacre, the movement mobilised its largest ever demonstration on 25 September, attended by a legendary crowd of 400,000. But there was by no means a public Israeli consensus against the war, there being many ardent, vocal supporters of Sharon’s war, for whom Peace Now were traitors.

So on that fateful night when Emil went out to demonstrate, he and the other 10,000 marchers had to pass, on their way from Zion Square to the Prime Minister’s office, a gauntlet of spitting, kicking, punching, missile-throwing, pushing, banner and torch-snatching, hateful counter-demonstrators, some of whom accused the Peace Now women of dishonouring the nation because of their love for Arabs. The last photograph of Emil alive shows him at the front of the demonstration, arms linked with other reserve paratroopers who were Peace Now activists, forging a way through the crowd for the demonstrators. 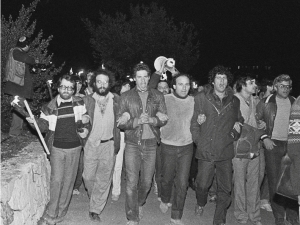 Emil Grunzweig, in the Demonstration in which he was assassinated. Photo: Vardi Kahana[/caption]

Yaron initially felt the impulse to participate in the elevation of Emil to a hero of the peace movement, but then, as did the rest of the Peace Now leadership, settled back into their regular mode of opposition to the mythmaking of the right. Although Emil’s memory was preserved through regular commemorative seminars about democracy and human rights, as well as the establishment of the Adam Institute for Democracy and Peace, perhaps the peace movement could have done with its own mythical martyr before Rabin’s assassination in November 1995. Orit Kamir wrote in Ha’aretz that the 30 year event was attended mostly by silver-haired pensioners. Emil has been largely forgotten by Israeli society; the trauma of the civil violence of his death in 1983 seems to have been repressed, actively forgotten.

But Niva Grunzweig has not forgotten her father, and in her speech at the commemoration knew to connect between the violence of her father’s murder, as he exercised his democratic right, and the state’s inaction against the political culture of incitement that led to his murder. More than that, she pointed to the affinity of the act of political violence that cost her father his life, and the daily violence exercised by the current Israeli state that delegitimizes all ‘leftist’ criticism as a danger to the state. Most significantly, she sees the connection between the violence through which the state was established and its ongoing violence towards its dissenting citizens and the non-citizens over whom it rules. As in the Peace Now slogan against the 1982 war to which Emil rallied, his daughter reminded us that a state that demands that we kill for it will also kill us. She imagines for us a saner future, imagining that the state take responsibility for its violence, and seek the forgiveness of its citizens and non-citizens by renouncing such violence. Peace, like sanity, might come to us by taking responsibility for the political violence of the state, the violence perpetrated in our name. All that Niva asks is that her children grow up in a state where they can expect their parents to come back alive from demonstrations against the government, to not be orphaned by state violence. All that she asks is the sanity that is peace.