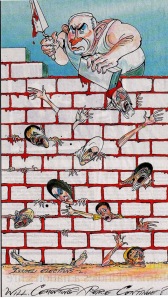 Picturing oppression by portraying blood can cause wounds, a lesson that the British Sunday Times and its political caricaturist Gerald Scarfe learned following the publication of a cartoon on January 27th 2013. The cartoon depicts Israeli Prime Minister Netanyahu, who had in effect been re-elected for another term of office earlier in the week, building a block wall in which the bodies of people are crushed, using blood as mortar. That Sunday was also Holocaust Memorial Day in the UK and other countries (but not in Israel). The response was swift. In The Commentator blog, Raheem Kassam wrote that the cartoon shows ‘the large-nosed Jew, hunched over a wall, building with the blood of Palestinians as they writhe in pain within it’, accusing the newspaper of repeating the infamous mediaeval anti-Semitic blood libel that was repeated by the Nazis in their Der Sturmer propaganda paper. Less polemically, a piece by Mark Gardner, of Britain’s Community Security Trust, republished by The Guardian on January 29th, argued clearly that the cartoonist’s intentions were beside the point. Rather, what matters is the association between the blood (that appears often in Scarfe’s work) in this case and the ‘blood imagery, sometimes explicitly as Blood Libel, [that] is commonly found in obscene anti-Israel propaganda in Arabic and Iranian media’. Because of its visual motifs, its iconography, the cartoon belongs to ‘the canon of contemporary antisemitic imagery’. In the face of such criticism, the cartoonist, the newspaper and its owner, Rupert Murdoch, did not take long to apologise for the timing and content of the cartoon.

I do not want to rehearse the argument about whether the cartoon is anti-Semitic, or whether it should have been published that day or another day. I want to ask another question, which is: how should we picture the blood of occupation? The critical responses to Scarfe’s cartoon adamantly insist: ‘not this way!’ But they focus on this cartoon blood at the expense of the blood that is shed by Palestinians subject to Israeli occupation. In the weeks leading up to the Israeli election, and in the days that followed it, there was a rash of fatal shootings of Palestinians by Israeli forces using live ammunition in circumstances that did not, even by Israeli military standards, seem to justify the use of such deadly force. Israeli human rights watchdog B’tselem reported five such fatalities in January 2013, their report being the basis for coverage in The Guardian on Sunday 27th January of the spate of bloodshed. One of the dead Palestinians, 17-year old Samir ‘Awad, was shot on January 15th by soldiers beside the Separation Barrier near Budrus, a location where anti-wall demonstrations are so frequent that a documentary film has been made about the village. So, when Scarfe depicted the bloody wall in his cartoon, he illustrated one of the occupation’s most potent symbols and most damaging, concrete, practices. His caption written beneath his illustration, ‘Will cementing peace continue?’ is an apt comment on the continuity of the occupation in its most vicious form following Netanyahu’s re-election.

There is blood spilled by Israeli forces in the occupation to be depicted. How else, then, to show it, if not in political caricatures with risky associations? There is always the practice of photojournalism, now more widespread because of the common use of cameras and the open publicness of social media. The blood of Lubna al-Hanash, fatally shot by soldiers on January 23rd near al-‘Arrub Refugee Camp is shown in this way, among a torrent of photographic images of the occupation that appear each day, attracting far less attention or concern than Scarfe’s cartoon. And some of the attention her death did attract shows the vile abuse of anti-Semitism. Blogger Aussie Dave simply accepted the Israeli military’s initial justification of al-Hanash’ killing, given the conflicting eye-witness accounts of her shooting he could find (in English) on the web, calling the incident a Palestinian blood libel. Once again, the victims are turned into the victimisers in the logic of denial that sustains the occupation.

Is, then, the picturing of the blood of occupation too contentious, too repetitious, or too open to denial for it be worth bothering? No, this blood needs to be pictured, it needs to be acknowledged. We need to take responsibility for it. In the painful documentary film, To See if I’m Smiling one of the women soldiers who served in the occupied territories during the second intifada tells of how she is haunted by her experience. Rotem knew that her observation procedures led directly to the shooting of a boy. After her release from service, she tells the camera that she called a friend and pretended to be joking about the blood she could not wash off her hands. Rotem is horribly traumatized by the blood. She needs to find a way to picture it, to talk about it. We all need to picture it, because the path to peace is through the trauma we have wrought and brought on ourselves, and because if we do not, Lady Macbeth’s madness awaits us.