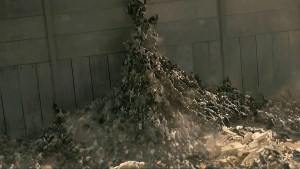 By now word is out that the new Hollywood summer blockbuster zombie movie, World War Z, includes a controversial section about Israel/Palestine. In the rapidly paced plot, driven at the speed of an action movie, the world is overrun by a viral pandemic of fast-moving zombies. Gerry Lane, the hero of the film, an American former UN investigator (remobilized for the emergency), played by co-producer Brad Pitt, learns from a former CIA operative in a US military jail in South Korea that Israel knew of the outbreak and had time to quarantine itself behind a wall. Lane flies to Jerusalem, where Mossad agent Jurgen Warmbrunn dispels the hint of a global Zionist conspiracy by explaining that they had intercepted Indian military communications about fighting the zombies, then implemented their survival plan based on prior experience of persecution and attack. As Lane is shown around Jerusalem, the film shows scenes (filmed in Malta) of a huge wall on the edge of Jerusalem that clearly resembles the existing notorious separation wall that encloses and cuts off most of the Palestinian West Bank. As in reality, the film portrays an elaborate military checkpoint through which healthy people of any background may pass into the safe zone, apparently allowing Palestinian Arabs as well as Israeli Jews to enter. But the joyful survivors celebrate together noisily, attracting the zombies outside, who pile on top of each other to climb over the wall, bringing the safe haven of Zion to an end. Lane narrowly escapes by plane, taking with him one of the Israeli military escorts, a woman who calls herself by her rank segen (lieutenant) and whose left arm Lane amputated hastily after she was bitten by a zombie, thereby saving her. Segen becomes Lane’s lieutenant for the rest of the film, a heroine who assists him in discovering and obtaining the medical means to camouflage the survivors from the zombies, namely, injecting the healthy with terminal but curable pathogens.

Al-Jazeera reported that some viewers have interpreted the film (both critically and favourably) to be ‘pro-Israeli’ because it justifies the separation wall as a means to keep out an implacable enemy bent on the annihilation of the Israeli population. Others noted the irony of Palestinians as well as Jewish Israelis being admitted through the checkpoint in the film, while others pointed out that the wall failed to keep out the threat. In a piece published in the Washington Post, Jake Coyle noted the ambiguity of the film’s message about the wall, wondering if it might be a symbol of peace, a haven for Jews and Muslims, which unfortunately is not secure enough. In light of the film’s sympathetic treatment of Israel’s brief, militarized survival as the world’s last civilized state, Jordan Hoffman approvingly takes it to be ‘the greatest piece of cinematic propaganda for Israel since Otto Preminger’s Exodus’, even while noting that it is the ‘joyous cherished vision of unity and peace’ – Israel’s admission of Palestinian as well as Jewish survivors who celebrate together – that leads to its downfall. Jesse Benjamin notes the same point in her critical reading according to which the audience is treated to a ‘not at all veiled justification of Israel’s current and widely condemned Apartheid Wall’ along with the usual (for Hollywood) racial and gender hierarchies.

The ‘message’ of the film regarding Israel goes deeper than whether the wall failed because it was not mighty, high or exclusive enough, or because the survivors were too noisy in their celebration, or because the wall is a failed strategy for security. The real wall itself is often credited by the Israeli government with preventing terrorist attacks, especially suicide bombers. ‘Zuicide’ bombers appear akin to zombies in that they are implacable, irrational, inhuman, and are already dead, or committed to death. Yet, the wall is neither complete yet, nor hermetically sealed, and the Palestinian Authority’s security force’s sustained cooperation with their Israeli counterparts, along with changes in Palestinian attitudes towards such violence, probably explains as much about the reduction in suicide bombings as does the wall itself. Nor is it one wall that encloses Israel, but a series of walls, fences, barriers and checkpoints built around Palestinians in the West Bank, in addition to being a target of protest and resistance itself.

Less significant than the portrayal of the wall in the film is its very character as an action drama infused with the terror of human annihilation by the mouths of the insatiable zombies. If, as I did, viewers suspend all disbelief, mortal fear is rarely more than 30 seconds away. Such existential anxiety in the film has been carried over from the books by Max Brooks on which it is loosely based, who explains in an interview that his books are not horror that conjures up fear but instead a vehicle for ‘a baseline level of just anxiety about the world I live in’ (emphasis added). The child of anxious and protective parents, Brooks enables his readers to ‘metabolize’ their fears about the world – HIV/AIDS, post 9/11 instability, natural disasters – into science fiction. The zombies are not real, but the grounds for fear are.

In the case of Israel and Zionism, such existential fear for survival is rarely far from the surface. For many, probably most, Jewish Israelis, fear of collective annihilation by a ferocious, implacable enemy underlies their felt need for security embodied in armed force and high walls. Zionism’s first military hero was Joseph Trumpeldor, a decorated former officer in the Russian army, who lost his left arm in battle (like Segen in the film), emigrated to Palestine in 1911, and died as the legendary defender of the Tel Hai settlement in 1920. Given Trumpeldor’s fate, I was relieved that Segen survived the movie, but by now Trumpeldor is very much a faded legend in Israel, as much a target of satire as a heroic figure, as Yael Zerubavel explains in her book Recovered Roots: Collective Memory and the Making of Israeli National Tradition. Segen, self-identified only by military rank, is always serious. With her shorn head, she appears in the scene in which she and Lane survive a plane crash wrapped in a blanket, looking every inch like a death camp survivor. The connection between near annihilation in the Holocaust and survival through military might is blatant. In the face of such inhuman hostility, much Israeli policy operates under the conviction that ‘the whole world is against us’, and ‘there is no partner for peace’. In World War Zion, Israel faces the zombies alone, and there can be no peace with zombies, or zuicide bombers. 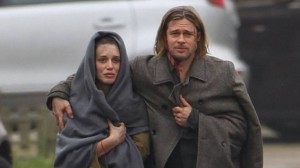 The fear is real, but the zombies are not. The Palestinians are not zombies, but people who want what Israelis have: civil rights, independence, and so on. Not all Israeli Jews see the Palestinians and other Arabs (and Muslims) as zombies, and Israeli perceptions and policies change over time. But the upper hand is with those who see zombies everywhere, build walls to keep them at bay, and disregard the value of their lives. The lives of the Palestinians do not count. Their lives are not, as the American Jewish philosopher Judith Butler puts it in another context, grievable when Palestinians are framed in Israeli discourse as zombies.

The ‘zombies’ that many Jewish Israelis fear came from elsewhere, from another time and place. Like the fears that Brooks channels into science fiction, these Israeli Jews displace their just fears of former persecutors in Europe and other places onto Palestinians and Arabs in general. It is a fear that I carry too, a fear that also allowed me to feel, for a while, in the movie that if only Israel survived, that would be good enough. But in order to avoid the injustice of treating Palestinians as zombies, as ungrievable lives, I and other Jewish Israelis need to understand – and feel- that we are not the only ones who are afraid, whose lives are lived in the shadow of existential anxiety, whose lives are, as Butler says, precarious. Out of concern for own precariousness, we have imposed it on the Palestinians. We have sought to be exclusive and pure in our precariousness, yet in the film it is not purity that immunizes human beings against the zombie threat (by camouflaging them), but self-contagion with pathogens. So long as we seek to be utterly secure at the cost of the insecurity and precariousness of Palestinian existence, we will not be secure, nor will we be at peace. Acknowledging the shared human condition of precariousness, and the unjust imposition of it on those we frame as zombies, is a precondition for a future peace.