Photographs of the signing of negotiated peace agreements are among the few conventions of the limited iconography of peace. Representing the partners shaking hands, perhaps even smiling at each other, often in the encouraging embrace of a mediator, such photographs are typical images of the sort of peace made between political leaders. Pictures of Arab-Israeli peace agreements follow an established formula, a seen in this vertical triptych printed by the New York Times on December 2, 2007.

The series is telling in itself. The top image shows Egyptian President Sadat and Israeli Prime Minister Begin smiling and holding hands upon signing the 1979 treaty between their two countries under US President Carter’s close watch. The middle picture shows PLO Chairman and Arafat and Israeli Prime Minister Rabin shaking hands, but without much warm body language, in the frame provided by Bill Clinton’s open arms, as they sign the 1993 Oslo Accords, which was a ‘Declaration of Principles on Interim Self-Government Arrangements’ (to establish the Palestinian Authority) rather than a peace treaty. The Oslo Accords envisaged a full and final peace agreement within five years, but the lowest picture records the unfulfilled promise of the one above. In 2007, with President Bush’s hand’s off encouragement, Palestinian President Mahmoud Abbas and Israeli Prime Minister Ehud Olmert allegedly came close to a final agreement, but not close enough. Bush holds the hands of his two guests, who do not (in this image) shake each other hands or exchange looks. 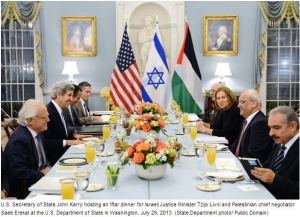 The current round of discussions, brokered by US Secretary of State John Kerry, about how to restart direct talks between the Israeli government and Palestinian Authority has already generated its own set of images. In a first series, the two chief negotiators, Israeli Justice Minister Tzipi Livni and Palestinian diplomat Saeb Erekat sit side by side opposite John Kerry at the dinner table, in a suitably posed impression of diplomatic relaxation before the hard work begins. Another series of pictures were published after it was announced that the talks about talks have produced the desired outcome of more talks that will begin in the Middle East in two weeks, aiming for a comprehensive peace agreement within nine months. These photos follow the generic convention of the mediator framing the two partners shaking hands. 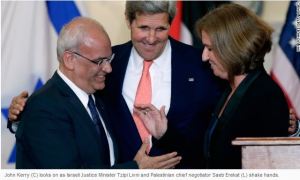 It may be more appropriate, though, to show here an image captured by CNN, before the two hands meet. The whole process seems so uncertain that all three participants have their eyes not on each other’s faces but on their hands. Will they or won’t they successfully grasp hands? At least the outcome of this encounter is much more certain than the achievement of a negotiated two-state solution to the Israeli-Palestinian conflict.

The sense of uncertainty and justified scepticism about reaching a final agreement in such a time frame, and to some extent the corollary cynicism about repeated, unsuccessful peace processing, is reflected in a non-conventional image by T.J. Kirkpatrick in the New York Times. The shot captures the procession of diplomats, none of whom seem to be looking forward to a destination. Ereket looks at his watch, as if time is already running out. Livni looks down, uncertain of her ground. Kerry seems ready to reach out to Livni if she stumbles along the way. In the photo, the peace process has become its own goal, not peace itself.

There is a part of me that was cheered by the news that this very first hurdle in the arduous process has been overcome. But that is the same part of me that expects to win the lottery, a part which indulges in wishful, if not magical, thinking. Once the procession begins, our attention switches to the success of the process, to the drama of breakthrough or breakdown in which the media frames peace diplomacy. For one thing, we lose sight of the peace for which we – and not only the suited diplomats – strive. Is a two-state solution the goal we should seek? Too late to ask, the race is on again. Our eyes are on the finishing line, not on the ground of the present, the ground on which the Israeli Housing Ministry today proposed to build an exclusively Jewish neighbourhood, in the Muslim Quarter of Jerusalem’s Old City, and the ground on which the Israeli occupation continues to operate by force. The peace that must be achieved is one that begins today, not as a photo-opportunity for but as practice of partnership. Perhaps, I hope, my suspicion about the pseudo-peace offered on John Kerry’s table will be proved groundless (and perhaps I will win the lottery). In the meantime, I place my modest hopes for peace with the activists against the occupation, not with the peace procession.

2 thoughts on “Picturing the peace procession”