Once again the ongoing tension between the Israeli government and Hamas has deteriorated into a massive, asymmetrical exchange of airborne explosives inflicted mostly on civilians. Last time, in November 2012, the Israeli military code for the “operation” was Pillar of Cloud/Pillar of Defense. Then as now the terminology varied between Hebrew and English, so now we have tzuk eitan (steadfast cliff) in Hebrew and Protective Edge in English. Who knows why. The current outburst of violence punctuates the persistent variation of armed conflict between the Israeli state and the Palestinian enclave of Gaza since the first mortar shell was fired from Gaza into Israel in 2001. We’re now up to the seventh Israeli operation to contain the launch of more than 8,500 Palestinian rockets, resulting in 4845 Palestinian dead and 174 Israelis, according to Ha’aretz. Probably somebody could estimate the mass of Israeli ordinance that has landed in Gaza, but the number would obscure the extension of destruction to Gazan property and prosperity brought about the Israeli-Egyptian siege. The siege hasn’t fulfilled its stated purpose of preventing the build-up of rockets in Gaza, only the rebuilding of homes and infrastructure after each explosion of destruction.

The code names of the Israeli military operation are much less significant than the conception of the Israeli-Palestinian conflict in which they occur: conflict management. Sage “realists” who live in think tanks have concluded that the conflict is too intractable to be “resolved,” as the Oslo process has collapsed and subsequent efforts to revive it and the associated “two state solution” such as the Kerry initiative have failed too.  The best we can hope for, they tell us, is that temporary accommodations can be found that minimize the degree of armed conflict. No more wars between states, only “low intensity conflict” between Israel and its chief current enemies, Hamas, Islamic Jihad, Hizbullah and other “non-state actors.” So, you see, peace may be impossible, but war has been rebranded. The logic of conflict management shapes Prime Minister Netanyahu’s and the Israeli government’s relationship to Gaza and its Hamas leadership. Absent the option of a peace agreement with the Palestinians (which is blamed on the Palestinians), the best alternative is to deter the “non-state actor” Hamas from, well, acting other than as Israel wants, which is to disappear. So it’s within the rules of conflict management to punish Hamas as a whole, and any inhabitants of Gaza who are unfortunate enough to get in the way, with a dose of “low intensity conflict” for the murder of the three Israeli teenagers kidnapped in the occupied Palestinian territories. And as Hamas responded with some “low intensity conflict” themselves, the conflict requires some more intense conflict management from the Israeli side, and so on, until things calm down for a while. Neither side really wanted the escalation, we’re told, so it’s just a question of time until they manage to find their way out. Sorry about the death and destruction until normal management is restored. 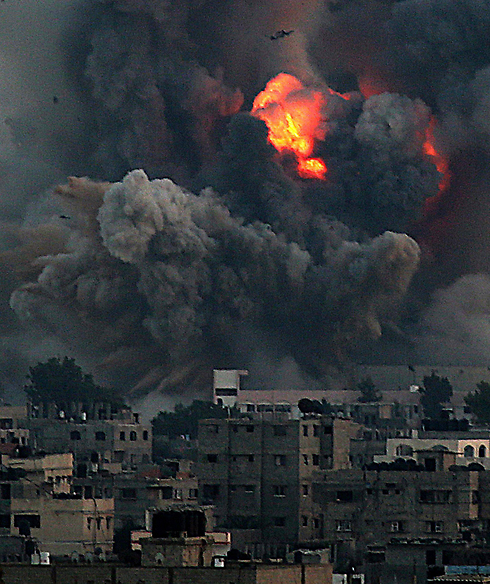 The “realists” who adhere to the doctrine of conflict management are not realists at all. The reality of conflict management is what is happening now. It is families in Gaza buried under rubble, and a lot more rubble. It is enormous and inevitable “collateral damage” (dead and injured people) of an Israeli operation that treats homes as legitimate military targets (“terrorist infrastructure). It is an Israeli pensioner who suffered a heart attack trying to get to shelter from indiscriminate rockets fired by Hamas and Islamic Jihad. It is civilians in fear of what is falling from the skies. This is what conflict management looks like. 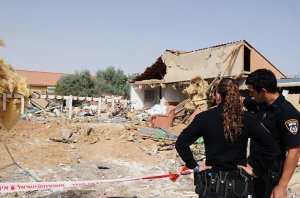 House destroyed by rocket in Beersheva. Photo by Herzl Yoseph

The asymmetry between the Palestinian and Israel casualties is immense, but it’s not a question of arithmetic. This low intensity conflict isn’t tolerable for Israeli civilians. It’s not so easy to manage shock and trauma, let alone physical injury, when you don’t live in a think tank. If you live in the confines of Gaza, there is nowhere to escape. This is what conflict management looks like.

There are some realists around, among the few voices in Israel that dissent from the mainstream discussion about how much military force should be deployed to manage the “non-state actors.” They might not look like realists at first sight. When everyone else is thinking about shelters that can withstand rockets, they put up a tent in a square. The Israeli Palestinian Bereaved Families for Peace, also known as The Parents Circle – Family Forum, have created a public space for peace in the midst of the war. 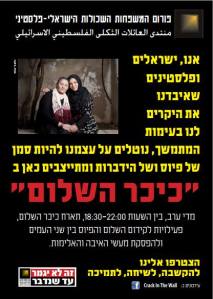 “We, Israelis and Palestinians who have lost loved ones in the ongoing conflict take it on ourselves to be a sign of reconciliation and dialogue.” They invite the public to join them, to listen, to discuss, for support. Based on their own experience of finding a way from their deepest pain to the pain of their enemy, they express their conception of conflict resolution in a slogan: “it won’t stop until we talk” (in Hebrew this rhymes as: ze lo y’gamer im lo n’daber). The horrific episodes of death falling from the skies won’t stop until there is a negotiation peace, a peace that the “realists” have given up on. The Parents Circle enact the difficult, painful reconciliation on the ground that is peace itself and paves the way for negotiation peace. That sounds realistic to me, a reality in which people can live.

2 thoughts on “This is what “conflict management” looks like”