A Stony Field, An Olive Grove, An Iron Dome: Researching Peace in Israel/Palestine at a Time of War

While researching images of peace produced and performed by Israeli activists, I found myself in a pastoral olive grove in Jayyous, in a stony field by Umm el-Arayes, then under an Iron Dome in Tel Aviv as another round of explosive violence erupted between Israel and Gaza. What peace was to be found in these sites? And which war was being fought?

This presentation is a reading that draws on my blogs (http://israelipeaceimages.com) and field notes from my research semester in Israel, fall 2012. It is not an academic analysis of my research material, but a personal reflection on some of my experiences and encounters. This presentation speaks to my motivation for and some of the challenges of undertaking such research. At some points I use ‘we’ to refer to Jewish Israelis, reflecting my own identification within my research context. The visual material you see includes my photographs, along with stills and video footage that activists groups circulate on social media, and other illustrative material.

Scene 7 – This war here, that war there (clips from Waltz with Bashir and Towards a Common Archive: Video Testimonies of Zionist Fighters in 1948) 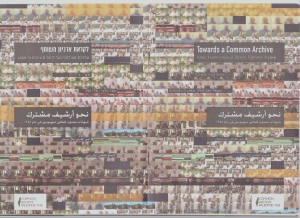 Catalogue cover for Towards a Common Archive exhibition

Last week a demanding and harrowing exhibition closed. The exhibition was called Towards a Common Archive: Video Testimonies of Zionist Fighters in 1948, consisting of more than 30 testimonies of Jewish fighters filmed especially for this project, one video of clips from documentaries by Israeli filmmakers with fighters’ testimonies, another video compilation of representations of the Nakba in Israeli feature films, and a video of testimonies by second- and third-generation Israelis who have heard first-hand reports of the Nakba. I attended the opening in October while on sabbatical in Tel Aviv.The exhibition was a collaboration between Zochrot, an organization that seeks to raise public awareness among Jews in Israel of the Palestinian Nakba, Israeli filmmaker Eyal Sivan, who now works at the University of East London and Israeli historian Prof. Ilan Pappé, now at the University of Exeter.

The ambition of the Common Archive project is both historical – to cross-reference testimonies by both Palestinian refugees and soldiers and commanders involved in the expulsion of some 700,000 Palestinian refugees in 1947-49 – and an exercise in peace-making. It may seem odd to consider the screening of testimonies about the Nakba to have anything to do with peace. Nothing is more likely to make Jewish Israelis and Zionists in general more defensive and less open to the needs of the Palestinians than confronting them with Israel’s ‘original sin’ – the uprooting of so many Palestinians to ensure that the nascent state would have a clear Jewish majority. Yet, the exhibition organizers take a different, more difficult path to peace through reconciliation, in which Israeli acknowledgment and accountability for the Nakba paves the way to tackling the most intractable issue of the Israeli-Palestinian conflict – the right of Palestinians to return.

I did not watch all of the hours of video testimony (which is viewable on both the Common Archive project’s and Zochrot’s YouTube channels) either at the crowded opening in the small gallery in an industrial building, nor on my return visit to the exhibition, or even on the DVD that came with the exhibition catalogue. It is more of an education than an exhibition, too much to bear in one sitting. It is an education not in the sense that unknown events are revealed, other perhaps than a detail here and there, but in that for the first time the perpetrators are the witnesses. It is not a question of Israelis being accused of crimes by Palestinian victims. Veteran Israeli fighters of the founders’ generation, often members of its elite commando unit, the Palmach, are the ones telling the stories of expulsions, killings, mutilations and massacre. We have known collectively all along, but preferred to repress, actively to forget these stories.

The testimonies I have seen tell of painful personal memories that merit repression yet need to be spoken and watched. None of the perpetrators have a problem characterizing what they did in the war of 1948 as “expulsion” of the Palestinians. The interviewers, Eyal Sivan and Ronit Chacham, ask the witnesses to specify what was involved in “cleaning” villages, the answers ranging from mostly shooting at the homes with small or heavy arms, sometimes shooting at those who fled, though mostly we are told they fled under cover of darkness, and sometimes entering the villages to throw grenades into houses. Some of the testimony tries to disconnect the violence perpetrated from the flight of the Palestinians: Yitzchak Tischler insists on saying that places “became empty” after being hit by fire; Esther Boss tells how shocked she was on entering the town of a-Lydd (Lod) to see so many corpses of Palestinian civilians on the streets, but is sure that Israeli loudspeakers calling on the remaining inhabitants in Arabic not to flee. Some witnesses like to distinguish between themselves who “conquered” Palestinian villages and those who came in afterwards to “clean” them. Some say that there was no order to blow up the homes, or that it came only later when Palestinians tried to return to them; others that they blew up homes, burnt crops, and killed camels so that there would be nothing to return to.

Some witnesses find it difficult to speak about certain incidents: Benyamin Eshet is reluctant to say more about what happened to those Palestinians who buried the 120 victims of the Dahamsh mosque massacre in Lydda on 12 July 1948. 10 years earlier he’d been called into the General Security Services offices after talking to a journalist about it. (The report by Guy Erlich was printed in the Tel Aviv newspaper Ha’ir on 6 May 1992).But through his hesitant and indirect testimony he reports that the buriers were shot. Lyddah was traumatic for Eshet. In contrast, the perpetrator of the massacre, Yerachmiel Kahanovich, seems unabashed when he tells how he shot a Piat anti-tank missile into the mosque’s hall. Only when he recounts his single glance into the building, in which he saw the bodies of all those who had taken shelter in it smeared on the walls, does the camera catch a glimpse of some deeper, troubled emotion in struggling within him to find expression.

For the most part, the perpetrators explain, if not justify, what happened as occurring in the context of a war in which there was no alternative, to clear terrain in case the armies of other Arab states attacked, to ensure a majority in the nascent Jewish State. But there are varying degrees of acknowledgements of ethical questions. Everyone regrets ‘unnecessary’ atrocities. Kahanovich is not proud of all the acts he perpetrated under such conditions. Esther Boss feels responsible for some acts, such as the wanton shooting of a Palestinian kiosk owner, but had no notion of ‘immoral orders’ at the time. Benyamin Eshet says there was no time to talk about what happened at the time, but others such as Yitzhak Tischler remember organised discussions about whether the revenge killings at Balad a-Sheikh on 31 December 1947 were justified. Much of the witnesses’ ethical reflection on the ‘purity of arms’ is displaced onto the issue of looting, of whether refugees were looted in their homes, or as they fled, or if only their abandoned homes were pillaged. In the Biblical tale of the conquest of Ai by Joshua, the first attempt failed because of divine punishment for a single act of pillage when Jericho fell. The conquerors of Palestine in 1948 are similarly clearer about the immorality of looting than of killing and expulsion.

The most telling testimony is the witnesses’ own comparisons of the columns of fleeing Palestinian refugees with Jewish refugees and victims in Europe during the Holocaust. Benyamin Eshet, himself a Holocaust survivor who had only been in Palestine for 1½ years before the war, is particularly haunted by the parallels, but it surfaces in the testimony of Yitzhak Tischler too. Micha Lin says at one point that he is not at peace with himself for the destruction of villages (the children of which he’d played with as a child), even though he’s not sure it could have been otherwise at a time of war. In Hebrew, to be at peace with yourself is to be shalem, to be whole, highlighting the connection between the Hebrew concept of peace, shalom, and wholeness. The Common Archive project, and Zochrot, build towards peace by demanding that Jewish Israelis become at peace with ourselves, to hold together our past and our present, to attempt to make ourselves whole. The exhibition demands not only that we acknowledge and take responsibility for the acts of expulsion and death perpetrated by Israel’s founding generation. It also demands that we reconcile our own traumatic history with the trauma we inflicted on the Palestinians. It is the most painful of reconciliations, to relinquish the role of victim and to accept that of perpetrator, but this is what the exhibition demands; and this is what a just peace demands.