Against the background of the unity march in Paris, which brought two million people together in support of liberty, freedom of expression, and in opposition to terrorism, some people found an additional element of hope in the proximity of Israel Prime Minister Netanyahu and Palestinian President Abbas among the marching dignitaries.

Children of Peace, an organization that helps “Israeli & Palestinian children build friendships through the arts, education, healthcare & sport in the hope this will lead to a peaceful future,” Tweeted a message of hope, reading the photo as a picture of potential peace. It would of course be lovely to be able to read into the solidarity expressed at the march a renewed solidarity between the leadership of Israel and Palestine in the struggle for peace.

But Twitter isn’t such a forgiving space, hardly a site for dialogue and reconciliation. Almost as soon as it was noticed how close Abbas and Netanyahu were to each other, other Tweeters were quick to condemn both of them as murderers.

Very soon afterwards, one of Netanyahu’s office’s Tweets with a photo of the scene that cropped out Abbas prompted comments from various bloggers who read it as a snub throwing cold water on any hope for renewed negotiations. Alternately, another shot caught what appeared to be the coldest of visual exchanges between the two.

Indeed, Netanyahu’s motivations for attending the march have nothing to do with hopes for peace. First, there are the reports that in spite of the wishes of the French government, he decided to travel so as not to lose face in his upcoming electoral competition with other Israeli politicians who announced that they would travel to Paris. So, the French invited Abbas.

More significant are a flurry of comments about the cynicism and opportunism of Netanyahu’s solidarity not with the radical, universalist values of the French republic – liberty, equality and fraternity – but with the victimhood of the French Jewish community. Netanyahu went to Paris not in human solidarity against racism and bigotry, but as an advocate of particularist Jewish nationalism, of Zionism in the form of emigration to Israel as the solution to anti-Semitism. Even before Netanyahu has spoken at Paris’ central synagogue, French Jewish leaders called on him not to treat the occasion as a platform for a call to emigration. Chemi Shalev in Ha’aretz echoed French Prime Minister Valls’ sentiment that France would not be France without its Jewish citizens, adding that a ‘Judenrein’ France would be a victory not only for the terrorists but also for the Nazis and Vichy regime. In the same newspaper Anshel Pfeiffer pointed out how the insecurity of French Jews played into the hands of the Israeli right-wing. And Allison Kaplan Sommer, blogging on the same Israeli site, accused Israeli politicians of “insensitive self-serving opportunism that infantilizes and undermines Diaspora Jewry” by calling for emigration in face of the anti-Semitic attack, the murder of Yoav Hattab, Yohan Cohen, Philippe Braham, Francois-Michel Saada by Amédy Coulibaly. Their comments – even if not their tone – were not far from Ali Abunimah’s blog on Electronic Intifada in which he wrote that “the idea that Jews are always alien and that hatred against them is eternal and immutable … is a fundamentally anti-Semitic one,” pointing to a “tacit alliance between anti-Semitism and Zionism,” by citing Columbia professor Joseph Massad. The writers in Ha’aretz I’m sure wouldn’t go as far as that last point (and neither would I), but in this context there is a deplorable confluence between Netanyahu’s almost direct call on French Jews (others were more direct) to abandon their homeland and move to their “historic homeland – the Land of Israel” and the anti-Semitic violence that undermines their sense of security. Just as it is vital at this time to ensure that the efforts of the terrorists, to drive a racist wedge between French Muslims and non-Muslims, be defied, so is it vital to reassert that French Jews are French citizens in every regard and for all time. 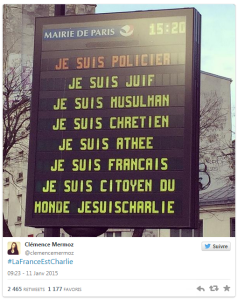 If there is a picture of peace to be seen here, then, it is not that of Netanyahu and Abbas linking arms by a few degrees of separation. It is, rather, in the outpouring of solidarity that allows each person to bear their identity without antagonism to the identity of the other. What is true for the streets of Paris today is true for the streets of Israel and Palestine. There will be peace only when racism is confronted, when Palestinian Israelis are not blocked in their struggle for civil equality because they are “the enemy,” when the assertion of Jewish-only rights to the land is repudiated, when the demonization of Israelis by Palestinians (and others) as Jewish oppressors is dispelled, and when all have the opportunity to claim their rights, first and foremost, as citizens of the world.