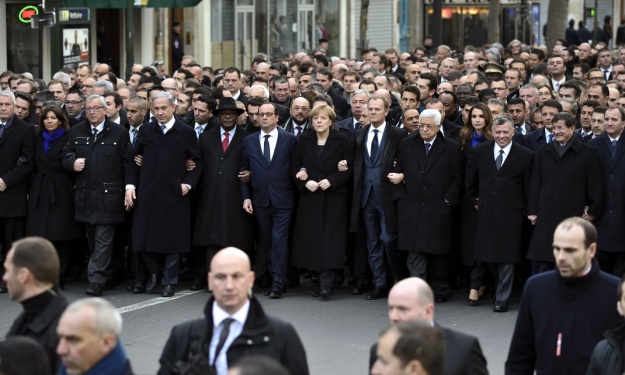 Against the background of the unity march in Paris, which brought two million people together in support of liberty, freedom of expression, and in opposition to terrorism, some people found an additional element of hope in the proximity of Israel Prime Minister Netanyahu and Palestinian President Abbas among the marching dignitaries.

Children of Peace, an organization that helps “Israeli & Palestinian children build friendships through the arts, education, healthcare & sport in the hope this will lead to a peaceful future,” Tweeted a message of hope, reading the photo as a picture of potential peace. It would of course be lovely to be able to read into the solidarity expressed at the march a renewed solidarity between the leadership of Israel and Palestine in the struggle for peace.

But Twitter isn’t such a forgiving space, hardly a site for dialogue and reconciliation. Almost as soon as it was noticed how close Abbas and Netanyahu were to each other, other Tweeters were quick to condemn both of them as murderers.

Very soon afterwards, one of Netanyahu’s office’s Tweets with a photo of the scene that cropped out Abbas prompted comments from various bloggers who read it as a snub throwing cold water on any hope for renewed negotiations. Alternately, another shot caught what appeared to be the coldest of visual exchanges between the two.

Indeed, Netanyahu’s motivations for attending the march have nothing to do with hopes for peace. First, there are the reports that in spite of the wishes of the French government, he decided to travel so as not to lose face in his upcoming electoral competition with other Israeli politicians who announced that they would travel to Paris. So, the French invited Abbas.

More significant are a flurry of comments about the cynicism and opportunism of Netanyahu’s solidarity not with the radical, universalist values of the French republic – liberty, equality and fraternity – but with the victimhood of the French Jewish community. Netanyahu went to Paris not in human solidarity against racism and bigotry, but as an advocate of particularist Jewish nationalism, of Zionism in the form of emigration to Israel as the solution to anti-Semitism. Even before Netanyahu has spoken at Paris’ central synagogue, French Jewish leaders called on him not to treat the occasion as a platform for a call to emigration. Chemi Shalev in Ha’aretz echoed French Prime Minister Valls’ sentiment that France would not be France without its Jewish citizens, adding that a ‘Judenrein’ France would be a victory not only for the terrorists but also for the Nazis and Vichy regime. In the same newspaper Anshel Pfeiffer pointed out how the insecurity of French Jews played into the hands of the Israeli right-wing. And Allison Kaplan Sommer, blogging on the same Israeli site, accused Israeli politicians of “insensitive self-serving opportunism that infantilizes and undermines Diaspora Jewry” by calling for emigration in face of the anti-Semitic attack, the murder of Yoav Hattab, Yohan Cohen, Philippe Braham, Francois-Michel Saada by Amédy Coulibaly. Their comments – even if not their tone – were not far from Ali Abunimah’s blog on Electronic Intifada in which he wrote that “the idea that Jews are always alien and that hatred against them is eternal and immutable … is a fundamentally anti-Semitic one,” pointing to a “tacit alliance between anti-Semitism and Zionism,” by citing Columbia professor Joseph Massad. The writers in Ha’aretz I’m sure wouldn’t go as far as that last point (and neither would I), but in this context there is a deplorable confluence between Netanyahu’s almost direct call on French Jews (others were more direct) to abandon their homeland and move to their “historic homeland – the Land of Israel” and the anti-Semitic violence that undermines their sense of security. Just as it is vital at this time to ensure that the efforts of the terrorists, to drive a racist wedge between French Muslims and non-Muslims, be defied, so is it vital to reassert that French Jews are French citizens in every regard and for all time.

If there is a picture of peace to be seen here, then, it is not that of Netanyahu and Abbas linking arms by a few degrees of separation. It is, rather, in the outpouring of solidarity that allows each person to bear their identity without antagonism to the identity of the other. What is true for the streets of Paris today is true for the streets of Israel and Palestine. There will be peace only when racism is confronted, when Palestinian Israelis are not blocked in their struggle for civil equality because they are “the enemy,” when the assertion of Jewish-only rights to the land is repudiated, when the demonization of Israelis by Palestinians (and others) as Jewish oppressors is dispelled, and when all have the opportunity to claim their rights, first and foremost, as citizens of the world. 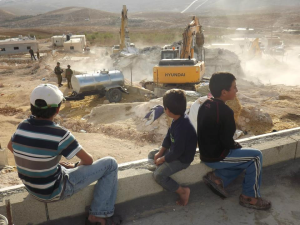 Images can have strange and strained relations with each other. In this case, the strained relation is between the corporate image of the Hyundai corporation and activists’ image of the Israeli occupation. The South Korean corporation is now best known for making Hyundai and Kia cars. As is the case with other global corporations, it is very conscious of its brand image. According to Hyundai’s Chairman and CEO Mong-Koo Chung’s corporate message of May 2012, its “brand value rose to over USD 6 billion, ranking 61st among the world’s top 100 brands.” Branding isn’t only about marketing; it’s not only about sales figures. The corporate message states that: “our goal is not to be the worlds’ biggest automaker, but to be the worlds’ most-loved automaker.” One of the ways in which Hyundai makes itself more lovable is by fulfilling “its duties as a global corporate citizen through its widespread corporate social responsibility programs.” So, on the corporation’s worldwide website one of the five heading options draws attention to Hyundai’s collaboration with UNICEF in its Global Endpoverty campaign, trumpeted under the slogan “Moving the World Together.” 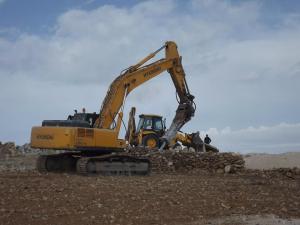 But Hyundai doesn’t only make cars. A photograph credited to “Operation Dove” displays the Hyundai brand name in a rather less lovable context, as a piece of its building equipment is put to use by the Israeli army to demolish a stone wall built by Palestinians in the south Hebron Hills area to pen in sheep. The Hyundai machine looks like a monstrous single-toothed dinosaur that has come not to move the world forward but to wreck it.

Another of the current five heading options on the corporate website leads visitors to Hyundai’s “live brilliant” branding campaign, one of the video advertisements for which features laughing children amazed at the world that they see during car journeys. The caption for the campaign is: “Hyundai makes every moment brilliant”. But in another photo of the same event, Palestinian children are pictured looking on in seemingly bored resignation as the Hyundai and other machines demolish another building. They may well remember this moment their whole lives, but not as a brilliant one.

The pictures (along with a description of the demolition operation, and a video posted by Operation Dove) will not only remind the children of this violent incident. They also threaten to damage Hyundai’s corporate image, which has been crafted as carefully as the dry stone wall. Like the flocks that can no longer be penned in by the wall, Hyundai’s brand value is in danger of becoming scattered. And if the brand value is lost, the corporation’s value could collapse like the house attacked by its machine.

The Israeli army is demolishing these structures in the South Hebron Hills region in Area C of the West Bank, which remains under full Israeli control following the 1993 Oslo agreement, on the pretext that it needs the land for live firing zone 918.  According to the Israeli military, the 1,800 or so Palestinians living in the area do so illegally, because the military law forbids residence in a live fire zone. And hence the army periodically demolishes buildings in the area that it also considers to be illegal. But a brief glance at a map of the area drawn by Israeli human rights organization B’tzelem suggests that the alleged military necessity for more training ground is underwritten by an Israeli political strategy of effective, creeping annexation of Area C, which comprises about 60% of the West Bank.

The photographs posted by Ta’ayush activists following this particular incident on November 6, 2012 are peace images that undermine Hyundai’s, and other corporations’, brand images. Ta’ayush is an Israeli-Palestinian grass-roots movement that engages in non-violent direct action to resist the occupation. It has been particularly active in the South Hebron Hills area in recent years, along with other Israeli peace groups such as Rabbis for Human Rights. These are peace images in that they vividly portray that the Israeli occupation is violent and oppressive, a state of affairs that must be ended to bring peace. They are also peace images in that they reflect Ta’ayush’s aim to “to break down the walls of racism, segregation, and apartheid by constructing a true Arab-Jewish partnership”. Building the partnership is peace-making.

Thus far, Hyundai has attracted less negative attention from the BDS (Boycott, Divestment, Sanctions) movement than other corporations whose equipment is used by the Israeli military in the occupied Palestinian territories, such as Caterpillar. Documentation of the incident shows the Israeli military deployed Caterpillar and JCB machines as well as the Hyundai monster, and the Electronic Intifada blog puts them in the same basket.  Hyundai’s brand managers should be aware that Hyundai will know no peace if the brand is associated with occupation and war.